De Sena. This volume contains 20 peer-reviewed papers highlighting historical, social and cultural episodes, conditions, and trends of the Empire during the reign of Septimius Severus, the last great emperor to lead the Romans prior to the third century crisis. Series: Gorgias Ugaritic Studies 8. An examination of the ethics of violence in the Ugaritic story of Aqhat using the conventions of characterization and the conflicting points of view. The points of view of the divine characters El, Baal, Anat, Yatpan, are contrasted with the points of view of the human characters, Aqhat, Dan'il and Pughat, in order to bring out the multi-dimensional aspect of Anat's violence.

By Sang Youl Cho. Series: Gorgias Ugaritic Studies 7. A comparative work on the nature and various roles of the lesser deities, the so-called angels, in the Ugaritic texts and the Hebrew Bible. Sang Youl Cho insists on the necessity for a comparative study between the two religious literatures from Ugarit and ancient Israel. The present study is interested in their membership in the heavenly council, their kinship among the deities, and their roles such as messengers, warriors, mediators, or servants, which have numerous similarities in the Ugaritic texts and the Old Testament.

Edited by Jeffrey B. Series: Perspectives on Philosophy and Religious Thought 5. Specific emphasis is given to phenomena such as dreams, visions, and initiatory rites mediating the divine encounter.

Series: Syriac Studies Library 3. This volume is a good quality reprint of the edition of Alfred von Gutschmid's classic text.

It will be of interest to scholars in the Syriac-speaking kingdom of Osroene or Edessa. By Simon Lasair. Series: Biblical Intersections 9. In this innovative book Simon Lasair explores some of the potentials of applying narratology to the Pentateuch Targums. Lasair argues that when the targums present coherent narratives, they largely carry the major structures of the Pentateuch over into an Aramaic context.

This book calls for a wide ranging rethink of the methodologies used to study targumic literature, as well as how to place the targums within their original historical contexts. Series: Syriac Studies Library This impressive volume is a collection of inscriptions, mostly Syriac, but also two in Akkadian and some in Aramaic, collected by Pognon during travels in the Middle East.

They are accompanied with detailed notes and French translations. Edited by Mishael M. Series: Biblical Intersections 7. Job finds himself in a situation similar to one experienced by everyone at some point in his or her life. He wants answers to questions concerning what has happened to him, since he lived his life according to the traditional wisdom and rules of conduct, asking what has gone wrong and why. The Book of Job raises fundamental questions of both the actions and expectations of humans and deities, and asks whether a clear understanding can be reached between them.

The contributing essays to this anthology help advance and sharpen both the questions and the responses to that question. Series: Biblical Intersections 8.

David the king, when studied against the backdrop of existing material cultural remains from the ancient Middle East, scarcely seems to have been there. Excavations in Jerusalem have turned up nothing concrete about his existence. The literature concerning him is fraught with problems and generally takes on a legendary-mythological character. Even the meaning of his name is unclear. If he is mentioned at all by his contemporary monarchs against whom he would have fought it is only obliquely or only intimated by omissions or partial spellings in context. This volume attempts to advance scholarship addressing these concerns.

This much-cited essay contains the third century Christian leader Cyprian's letter to his friend Donatus written shortly after his conversion. Series: Gorgias Ugaritic Studies 6. From Ugarit to Nabataea is a collection of articles on the texts and cultures of various Near and Middle Eastern societies such as Ugarit, Ancient North Arabia, Nabatea, Palmyra, Edessa, the monasteries of Mesopotamia, and modern day Syriac-speaking communities. They include discussion of the religious beliefs, iconography, epigraphy, architecture and language of these societies — fields to which John F.

Healey has contributed in his long, distinguished and varied career. By Mark A. Christian analyzes priestly social dynamics in-depth as they develop through tribal history and specialization of tasks. He focuses on middle-tier Levites as their skills and specialized knowledge place them in upper classes but their work relegates them as intermediaries.

By Robert D. The book takes seriously the study of text in its ancient context in order to highlight the theological content and its modern relevance. By Israel Finkelstein. The author responds to criticism against his prior publications, when his conclusions were based foremost on the relevant archaeological findings. It is a debate between methodologies used by archaeology and the assumptions of textual analysis within biblical scholarship. Series: Kubaba 2.


Kubaba is a peer-reviewed journal which specializes in the geographical region of Southwest Asia, the Eastern Mediterranean, and the Aegean before the Classical Era. It publishes articles, notes, news and reviews. Edited by Ehud Ben Zvi. This volume incorporates all the articles and reviews published in Volume 10 of the Journal of Hebrew Scriptures.

An elaborate historical treatise on the fall of Nineveh and the writings of the prophet Nahum, this work is divided into three chapters. The second chapter is a history and description of the city of Nineveh from earliest times to its downfall. A brief but interesting discussion of the origin and development of the Medes as a people closes the second chapter. The final chapter is an archaeological and scientific military description of ancient Assyrian fortifications and a treatise on their use in the warfare of the period.

An early study of the Babylonian kudurru boundary stone inscriptions of what is now known as the Kassite Era, this booklet presents a self-contained exploration of two of the markers.

A detailed commentary follows the presentation of the actual texts, and this is accompanied by notes from the original drawings of the text. Carefully reproduced full text hand-drawn copies are also included. This book explores the role of the biblical patriarch Abraham in the formation and use of authoritative texts in the Persian and Hellenistic periods. It reflects a conference session in focusing on Abraham as a figure of cultural memory in the literature of these periods. Cultural memory is the shared reproduction and recalling of what has been learned and retained.

It also involves transformation and innovation. As a figure of memory, stories of Abraham served as guidelines for identity-formation and authoritative illustration of behaviour for the emerging Jewish communities. Series: Kiraz Historical Grammars Archive Isaac Taylor is best known for his archaeological and philological works, especially his detailed study of the alphabets published in Taylor begins with a discussion on the invention of writing and the origin of the alphabet, then gives a discussion of three alphabetic families, what he calls the Phoenician alphabet, the Aramean alphabets covering Palmyra, Hebrew, Syriac, Mongolian, and Arabic , and the south Semitic alphabets covering Sabean and Ethiopic.

This volume represents the Bross Lectures given by Frederick J. Bliss in in which he describes the religious practices of Christians and Muslims in Syria and Palestine. Previous generations of scholars believed that prophecy was unique to ancient Israel. However, recent archaeological discoveries reveal that numerous societies in the ancient Near East practiced prophecy. This study examines the similarities and differences between Neo-Assyrian and biblical prophecy, particularly focusing on the 7th c.

BCE prophets Nahum, Habakkuk, and Zephaniah, and discusses what implications these differences may have for our understanding of these prophets. Ancient Egypt By George Rawlinson. Series: Kiraz Classic Archaeological Reprints 6. The Ramesseum And the Tomb of Ptah-hetep. This work contains inscriptions from the Ramesseum in Thebes and the tomb of Ptahhotep at Thebes, as well as the archaeological work of in Egypt. A vivid glimpse of the early years of one of the prestigious American Schools for Oriental Research, when a dozen students traveled the Middle East each winter.

This report documents some of the troubles they faced. 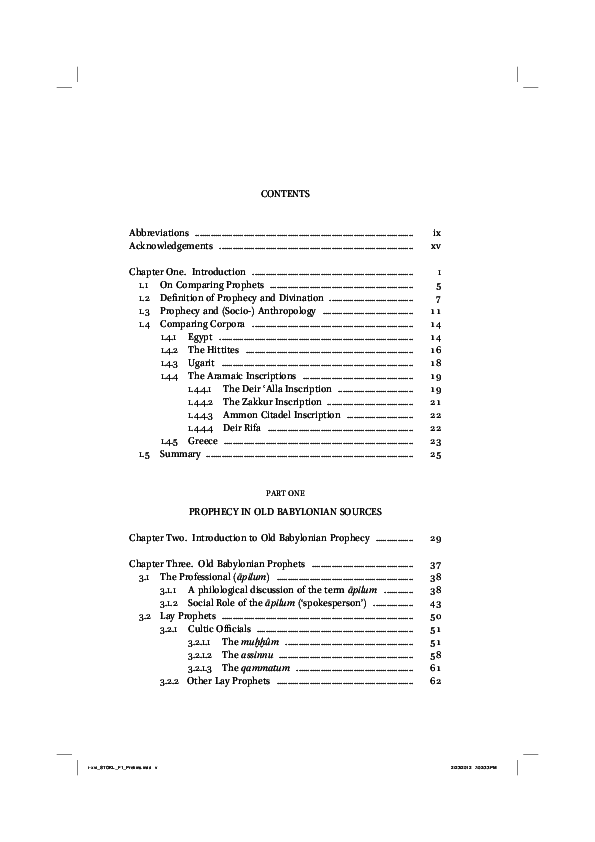 Related Prophecy in the Ancient Near East: A Philological and Sociological Comparison